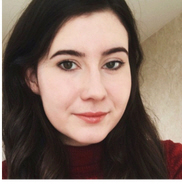 I am 23 and I was diagnosed with Selective Mutism about 20 years ago.

Initially, my mum worked on techniques with me at home, in conjunction with support from professionals. These techniques were gradually brought into the school environment and public places, where the anxiety would be higher and speech would be less forthcoming.

Although there was underlying anxiety that remained constant throughout my early school life, this professional intervention was generally successful. I excelled in a number of subjects, I even took part in school plays and athletics tournaments. I mostly enjoyed life and had close friends who I could talk, play and laugh with.

As adolescence approached, this all changed. I cracked and the anxiety took a grasp of me that I could not control. Toys were being replaced by mobile phones and make up, and the new social pressures of entering adolescence were overpowering me. My childhood was fading and so was my voice.
Many changes had occurred in a short space of time: the transition to secondary school, a death in the family, puberty/hormonal changes, as well as a house move and other events within the family. There was also a brief time living abroad, where I attended a school taught entirely in different language. I believe that these could have all been contributing factors in the manifestation of the SM/anxiety.

From this point, my school attendance became increasingly sporadic. I was hardly able to communicate with my peers and teachers. Eventually tasks such as eating lunch or asking for help in lessons became impossible. I would freeze and shut down. Most lunch and break times I hid myself away in the toilets in tears. Due to a build-up of the isolation I felt and the frustration of not being able to communicate, I developed severe depression in conjunction with my SM. This escalated after a terrible incident of humiliation and personal remarks from a teacher, caused by my inability to speak in lessons. I could not return to the school.

The next few months were a blur of counterproductive therapy sessions, with a lack of understanding from most professionals I saw. By age 14, I could barely leave my bedroom or look after myself. My feelings of isolation were enhanced when I saw photos and updates online from people at school, going to parties and events, entering into relationships, excelling at school and passing their exams. I desperately craved this normality, but I only felt it drifting further and further away from me.

I was eventually admitted to a psychiatric hospital. I believe this escalation could have been avoided if it had been for more awareness and understanding of SM and more appropriate support in place. Some hospital staff had not even heard of SM, let alone knowing how to provide appropriate help. I would sometimes be left in my room with no food or water for days at a time as I could not ask, and no one would come and take me to the canteen. Although the overall experience was pretty abysmal, seeing other people my age in the midst of mental illness first-hand helped me feel less alone with my own. This consequently lead me to develop a greater sense of empathy towards others. Changes began to occur and some progress was made. I believe that this came mainly from myself and from the support of certain family members and friends, as well as a number of other factors.

I managed to start at a different school at age 16. The special needs department were made aware of my SM, but there were still misunderstandings and negative experiences, from both teachers and pupils. I was, however, allowed to sit exams in a smaller room with extra time and rest-breaks. I was excused from high anxiety inducing lessons, such as PE and drama, and also given a quiet room to sit in at lunch and break. These adjustments got me through to obtain my GCSEs.

Although I had a lot of negative experiences with teachers, I did have some who were incredibly willing, helpful, and understanding throughout my whole school experience. Some of whom would go out of their way to research SM in their own time, so they would know how to help make my school life more manageable for me. I cannot express what a difference this made.

Something that has been constant throughout has been my creativity.
With the social pressures of school removed, and without the worries of the other subjects, I was able to focus entirely on my art. At age 18 I began attending watercolour and oil painting classes at the local Adult Education Centre. They were small, relaxed and informal – the opposite of school. Although my anxiety was high at first, meaning I could not communicate much, I was gradually able to relax more into the classes. With support from family members, I started to look into what would be required for me to attend university to study art. At the time, it seemed an impossibility as I had not done A Levels and had no qualifications above GCSE level. However, 2014, I was offered a place at my first choice London Art College, Wimbledon College of Arts, to study Fine Art Painting. In summer 2017, I completed my degree.

When I was in hospital at age 15 without an ounce of hope left in me, one of the nurses asked me “If you could be anywhere in five years, where would it be?” I responded in a quiet, helpless voice with a blank stare at the floor, “at art college”. I remember almost laughing to myself hopelessly at the sheer ridiculousness of that idea. But, lo and behold, there I was at Art College five years later.
University came with its challenges, but in general these were easier to manage than the challenges school brought. I was able to access help from Disabled Student’s Support. I did have difficulty socially, but I made some great friends and felt that my peers accepted me. 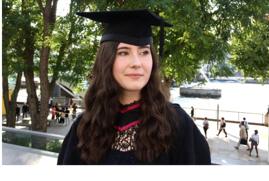 Since graduating, I have received a lot of interest in my art. I was selected to take part in the Clyde & Co Art Award Programme and went on to win their Staff Vote Award. I have also gained representation with an online gallery, where I sell my work. I now have a place on a Masters course for Autumn 2018 with a bursary award. Recently, I was shortlisted for the Royal Academy Summer Exhibition and interviewed by the BBC.

Although I often cannot believe the progress I have made, I still have times where I am entirely overwhelmed with anxiety and SM rears its head, disrupting my agenda. I have days where I cannot leave the house, answer the phone, attend a meeting/appointment or go about daily tasks. However, these are gradually becoming more infrequent and less disruptive. I am proving to myself, and to others, that it is still possible to achieve things and live a life, despite the challenges I face.

I have learned the importance of patience and perseverance. I have also learned that the SM not my fault or my choice, as many have tried to lead me to believe. It is not my whole identity, it does not define me, it is just an element of me.

I am gradually finding myself and building my confidence. I am discovering ways to manage and cope with support of family, friends, my recent art successes, and help of online groups such as SMIRA and SM Space Cafe. As well as this, I have recently started attending Peer Support groups for adults with SM. It has been a huge help giving and receiving support from others with lived experience of SM, both online and in real life. Prior to this, I believed I was completely alone with it.

As I get older, I am learning to see the positives in my journey with SM, and mental illness in general. I believe it has made me a more sensitive, empathetic, observant and caring individual, as well as helping drive me to produce more powerful art as my main form of communication.
I feel nervous sharing my story, but I feel I owe it to my younger self, as well as those who are suffering currently. Now that I do have my voice more (or at least my computer keyboard for now!) I am determined to do what I can. Education, awareness and understanding are all so important in order to provide more appropriate support, and eliminate the stigma that individuals with mental illnesses often face. 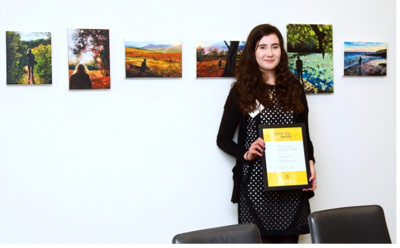 Note: An edited version of this article appeared in the Huffington Post on 01/08/2018